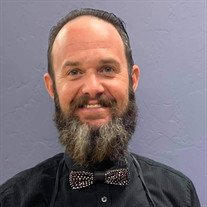 Robert Nathan Clark passed away February 16, 2021. He was 39. Nathan was born in Morenci, Arizona, on December 18, 1981, to Robert and Vickie Clark. In 1985 his family moved to Thatcher where he attended school until he graduated in 2000. He played the quads in the school band and took classes at EAC. Nathan began working at Safeway as a teenager and went on to become an Assistant Manager. In 2010 he welcomed the joy of his life, his son Robert Rowan Clark. In June of 2017, Nathan graduated from the Eastern Arizona Academy of Cosmetology. He had a career at Great Clips where his coworkers became more than just coworkers, they were more like friends and family. The girls lovingly referred to him as their protector. Nathan had a love for spending time with his son and fiancé, playing the drums, music, his pets, random interesting facts and painting. He would often send song links to friends and family when he knew they were having a difficult time. He loved big and he felt deeply. We have been thankful for all the stories people have shared about how Nathan reached out to them when they were hurting and when he performed random acts of kindness. We are thankful to have been able to love him and he will be missed more than he could have ever imagined. Nathan followed his father Robert Earl Clark in death by just 13 days. He is survived by: son, Robert Rowan Clark; fiancé, Lisa Rothleutner; mother, Vickie Clark; brother, Ryan (Norma) Smith; sisters, Jackie (Jason) Bryce and Kayleen (Nick) Leachet. A joint Celebration of Life event to follow for Robert and Nathan. Carry on my wayward son There'll be peace when you are done Lay your weary head to rest Don't you cry no more

To order memorial trees or send flowers to the family in memory of Nathan Clark, please visit our flower store.