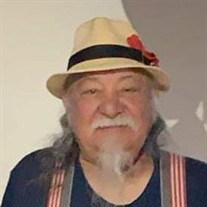 Moe started working at a young age with his dad for local farmers. He also worked for Southern Pacific, did some construction work, worked for various farmers, and in 1978 started working with Olsen Farms. Moe worked for them until 1995 when, for medical reasons, he retired.

Moe volunteered as an umpire at Kiwanis Park, some of you remember him from playing ball there. Moe was Pancho Claus for many years, many received candy canes, or a small gift and it always came from the heart. Moe started the 4th of July fishing derby, he did it for 30 years. He hosted the Thanksgiving dinners at the American Legion also for 30 years, 2019 being the last year he did both. Moe became a member of The Sons of American Legion under his Dad who served in the Army, and he did it with pride. He served as S.A.L Commander for most of his 30 years. Moe was also a member of the Gila Valley Honor Guard for 35 years. Moe honored many veterans during this time, he loved honoring those that served our country.

Moe received the Pride of Safford Award in 2016, the most prestigious award the City of Safford can present to a citizen. He was awarded for all he did for our community. Moe was diagnosed with cancer in 2014 and fought a brave courageous battle until December 28, 2020. He was 70.

Moe is survived by: his wife of 53 years, Stef; his son, Moe Jr. (Tawnah); his daughter, Samantha; his sisters, Sally, Anna and Nikki; his brothers, Pancho, Jose and Larry; 12 grandchildren, 22 great-grandchildren, and a host of family and friends. Moe was affectionately known as Nino or Tio Moe to many.

Moe was preceded in death by: his daughter, Anna Maria on October 13, 1967; his son, Andres on November 18, 1995; his grandsons, Johnny and Omar; parents, Camilo and Ramona; his sisters, Gloria, Cathy and Nena; his brothers, Ramon, Yogi and Smokey.

A Mass of Christian Burial for Moe will be celebrated Friday, January 15, 2021, at 11:00 a.m., at St. Rose of Lima Catholic Church by Rev. Nicodemus Shaghel. A luncheon and gathering for family and friends will follow all services on Friday, at the Safford American Legion Post #32.

To order memorial trees or send flowers to the family in memory of Moe Villalba, please visit our flower store.