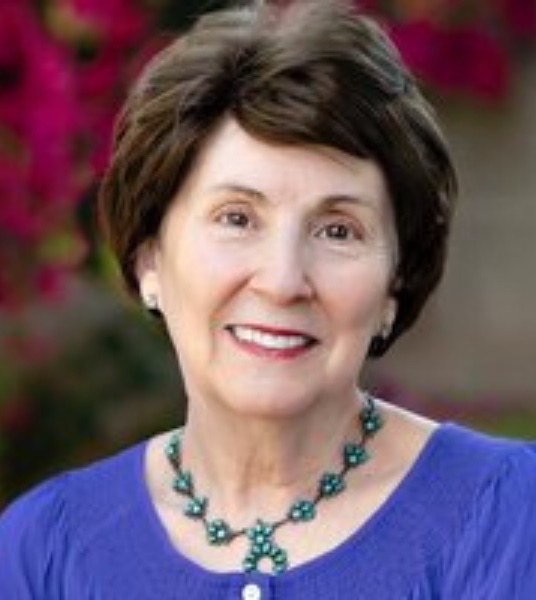 On Saturday, June 5, 2021, Elma Maria Lee Hoopes of Tempe, Arizona, loving wife of Jay and caring mother of six children, passed away at the age of 75 in Lehi, Utah.

Maria was born in Provo, Utah on Father's Day, June 17, 1945. Her parents, William Day Lee and Carol Varis Phillips Lee, welcomed her to this earth and named her to honor her father's step-mother, Elma and mother Mariah. Called by Maria throughout her life, she always felt special and loved, often being told she was her father's gift.

Maria was raised in Utah, Montana, and Idaho as the family followed work. Although her family never had much money, Maria always felt richly blessed. She loved watching her mom and dad waltz, kiss, hug and sing together. Though she experienced many hardships, she kept only the happiest moments in her heart and in turn, witnessed the tender blessings given by the Lord when a home is filled with love.

Maria attended high school in Orem, Provo, and Murray High School in Utah. She loved her junior and senior years making new friends and participating on the cheerleading squad. After high school Maria's mother felt as though she needed a change and arranged for Maria to move to Tucson, Arizona to live with her sister Carill Ina Nicoll.

Maria had never before seen cactus or palm trees, but learned to love the Arizona desert. In Tucson, Maria worked as a dental assistant and attended the University of Arizona Institute of Religion. It was at an institute New Year's Eve dance that Maria met Jay Hoopes for the first time. Jay knew instantly that she would be his wife, but Maria needed a little more convincing. Following a desert rain storm, Jay proposed to Maria in a field of perfuming creosote bushes. To his dismay, she said no and informed him she was waiting for a missionary to return. Within days, Maria realized she wanted to be with Jay. They were married on August 28, 1964 in the Salt Lake Temple and sealed together for time and all eternity.

Maria and Jay honeymooned on the way to their new home in Seattle, Washington. There, they welcomed their first child, Curtis. After two years, they relocated to Tempe, Arizona where they had five more children: Sharon, Spencer, Jonathan, Anna, and Laura.

Maria's membership and service in the Church of Jesus Christ of Latter-day Saints was a treasure to her. She served many years in the scouting program, earning the Silver Beaver award, the highest honor given in scouting. Maria was also a self-taught computer "expert" and became proficient in the church's family history programs. Many sought her help, especially while serving as a missionary in the Mesa Family History Center. In 2010, Maria and Jay served a full-time mission in Detroit, Michigan, focused on helping people find employment.

Maria carried the good news of the gospel everywhere she went. She sought the closeness of the Holy Spirit and felt closest to the Lord in the Temple. Maria cherished the blessings given there and was honored to serve as a temple worker for a time. After she was diagnosed with Frontal Lobe Dementia and Alzheimer's her service transitioned to playing the organ. Until 2019, she joyfully served the Lord in the Temple by playing hymns.

Maria loved her children and grandchildren. She spent her life teaching, strengthening, and uplifting them and always looked for new ways to both draw her children together and closer to the Savior. Maria and Jay spent countless hours writing, transcribing, and compiling not only their own life histories, but those of their pioneer ancestors. They shared their testimonies in every possible way they could think of, including making videos and giving meaningful, symbolic Christmas gifts to her family. All of this was to create a record for their children that would "continue the unbroken light of the gospel" and to help them remember "He who is the giver of all good gifts."

In time, Maria recognized her memory was failing. Determined to preserve the memories of her family, she researched anything that could help. She exercised, focused her diet on helpful foods, and played the piano for hours to keep her brain active. Each day, she wrote down her many blessings, making sure to number each one. Until the last month of her life, she repeated the names of her children every night, so she would not forget.

Maria's battle against Alzheimer's and Frontal Lobe Dementia was a beautiful example of perseverance and enduring to the end with a thankful heart. She never allowed the disease to stop her from sharing the light of the gospel. Maria's faith and testimony continued to shine through gloriously. Her desire to follow God's commandments, love her family, and find joy in her journey never ceased. The day before her passing she cheerfully sang "For Jesus is my light. Oh, there's sunshine, blessed sunshine, when the peaceful happy moments roll. When Jesus shows his smiling face, there is sunshine in my soul."

Maria is survived by: her six children and their spouses, Curtis and Camille Hoopes, Sharon and Troy Sheffield, Spencer and Jacqueline Hoopes, Jonathan and Marni Hoopes, Anna and Michael Gregg, Laura and Brian Ebie; her brother, Gary and Loraiine Lee; her sister, Linda and Ricahrd Jackson; 26 grandchildren and 3 great-grand babies.

We love you Mom. We are sure that your soul is full of sunshine as you reunite with the love of your life and dear family. 'Till we meet again.

To order memorial trees or send flowers to the family in memory of Maria Hoopes, please visit our flower store.