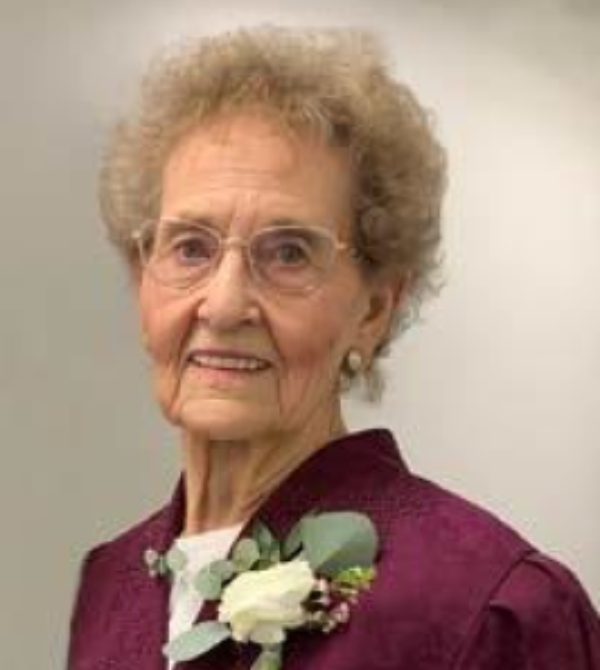 Letha was born on April 6, 1927, as the sixth child of thirteen in the family of James Alma Larson and Grace McBride Larson. She was born at her grandmother, Laura McBride’s home, in Glenbar, Arizona while her mother was visiting her own mother. Her parents were residing in Phoenix, Arizona at the time.

Letha spent her childhood and youth living in Phoenix. Her family later returned to the Gila Valley and settled in Glenbar where her grandparents and many uncles, aunts, and cousins lived.
Letha entered first grade in Pima, Arizona at the age of six, and graduated from High School in 1945. She attended one year of Gila Jr. College before getting married in 1946.

Letha met her future husband, Loren Burrell, at age 16 when he was home on leave from the Army Air Force before being sent overseas to participate in World War II. He was a gunner on a B 24 airplane that went on 35 missions over Germany. She didn't see him again until the war was over in 1945 and became reacquainted with him again at college. They dated during the year that she spent at college. At the end of that school year, she went to Tucson to work at the Mountain Bell Telephone company. Loren went to San Diego, California, to look for a job. He found work there as a bookkeeper at the First National Bank. In September 1946, Letha moved to San Diego, and they were married on October 11. On October 11, 1948, two years later, they were endowed and sealed to each other and their son Randie in the Mesa, Arizona temple of the Church of Jesus Christ of Latter-Day Saints.

Letha and Loren lived in San Diego for all their married life, except for a year when Loren was recalled into the Korean War. Letha and her two children, Randie and Bradley, went to Safford, Arizona to live during that time.

Letha and Loren were blessed with six children: Randie, Bradley, Marcia, Denise, Rita, and Marlin. They also welcomed Ron Singer into their home to care for him as their own during his high-school years. He has always been treated as a part of our family ever since. Bearing and caring for her children were Letha’s main activities and joys she had from the time she was 20 until they were all grown and out on their own.

Letha was raised as a member of the Church of Jesus Christ of Latter-Day Saints. She had a strong faith and testimony of the Savior, Jesus Christ. She served in many church callings throughout her life, including service as a Young Women President twice and assisting with girl’s camp for 30 years. She was a Relief Society President and served in the Stake Relief Society as a Councilor. She loved keeping a personal journal and taking pictures and started at an early age; so, when she was called to serve as the Ward historian, she was a perfect fit. She was a member of the Daughters of Utah Pioneers organization and served as Historian there as well. In her later years, Letha always wrote a birthday letter to each of her children, grandchildren, and great grandchildren to express her love to them and encourage to them to live a righteous life and work on their goals in life.

Letha and Loren served as Stake missionaries for the church in San Diego from 1975 to 1976 during the same time that their daughter Denise was serving her mission in the Missouri, Independence mission. During that time, they conducted tours at the Mormon Battalion Historic Site where Letha always mentioned her relationship to Samuel Lewis, one of the battalion soldiers. Later, in 1990, they served a mission for the church in the Toronto, Canada mission. They worked in the Mission Presidents office and fellowshipped and taught lessons to new members as well. When they returned from their mission, they served as workers in the San Diego temple for 13 years.

During their family’s growing years, Letha and Loren always spent their vacations visiting family. As a result, her children knew all their aunts, uncles, and cousins. They had lots of fun visiting with each other. Letha was always interested in traveling to see other countries and experience their culture. She was able to do that more often with Loren after her family was raised. Loren’s favorite saying about her was that Letha’s middle initial didn’t stand for Grace but for “Go.” After Loren passed, she was also able to take trips with her children to various places in Europe and Asia. She sung in the hills of Austria with Marlin and Dad, kissed the “Blarney Stone” in Ireland with Denise and Don, climbed the slopes in Switzerland with Marcia and Tanya, strolled the streets of Spain with Marcia and Randie, and climbed the great wall of China when she went to China with Rita, Derek, and John.

In 2007, her husband Loren became bedridden after an extended hospital stay. She took care of him in their home until his passing in October of that year. Later, in 2009, she had a home built in Orem, Utah where she was able to live near her daughter Rita and was able to visit more with Bradley and Denise and their children. Later, her daughter Marcia sold her home in San Diego and moved in with her. Marcia lived there with her until her passing. Letha loved visiting her family and friends and having them visit her. She took pictures to document almost every adventure she and had with her family and friends.

Letha is survived her children: Randie (Dixie) Burrell of Poway, California, Bradley of West Valley City, Utah, Marcia Helzer of Orem, Utah, Denise (Donald) Jewkes of Murray, Utah, and Rita (Derek) of Orem, Utah. She has 19 grandchildren and 50 great-grandchildren with one on the way.

Funeral services for Letha will be conducted Thursday morning, August 4, 2022, at 11:00 a.m., at the Twentieth Street Chapel of the Church of Jesus Christ of Latter-day Saints by Bishop Paul Badger of the Safford 2nd Ward. Concluding services will follow in the Safford Cemetery.

The family will receive friends Thursday morning, August 4, 2022, from 9:30 a.m. until 10:45 a.m., at the Twentieth Street Chapel Relief Society Room of the Church of Jesus Christ of Latter-day Saints.

To order memorial trees or send flowers to the family in memory of Letha Grace Larson Burrell, please visit our flower store.