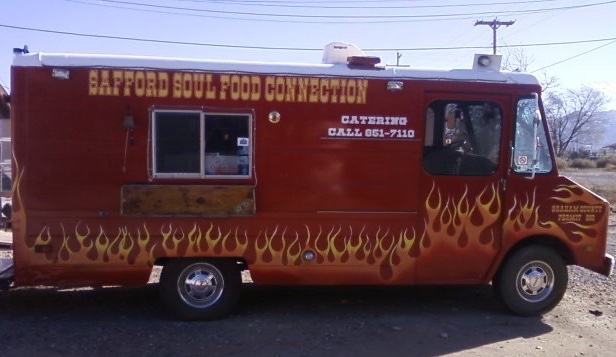 Benjamin Franklin Harrell, III, of Safford and owner of Safford Soul Food Connection, entered into rest Wednesday, January 19, 2022, at his residence. Junior was 62.

Benjamin, early in his life showed that he was blessed with a creative side and had many natural talents. He was not short in talents and gifts: in Junior High, he attempted to create a computer and he self-learned how to play the guitar and with his sisters, Rosanna and Deborah, he would hold performances in the neighborhood and people would actually pay to attend!

Benjamin had a competitive spirit and he always strived to be and have the best...no normal for him! In his teenage years, he had a love for cars and would spend countless hours personalizing his car so that it would stand out from others. His first car, he personalized with a real rabbit fur dashboard, but it was short lived as the family dog ate it. His father, the late Benjamin Franklin Harrell, Jr., and mother, Helen Harrell, would regularly take him to church and in his life journey, he made the decision to accept the Lord Jesus Christ as his personal savior and was baptized.

He was a man of deep conviction and thought, he experienced the ups and down in life and came to the decision to allow only a few people into his life circle. So, if you knew Ben personally, it was because he chose to let you in. One of those special people is Tim Brown, he remained a loyal friend to Ben until the end. Another special person is Sandra Hayes and from that relationship his heart grow 2 sizes larger when his twin daughters, Keisha and Kayla Hayes, were born. As with everything else, Ben strived to be the best father to his daughters.

Gleaning from his special moments with his father, he shared his love for fishing, camping, cars and cooking. It was cooking that broadend his life circle even more and he is known to most as “Safford Soul Food Connection” cooking everything from ribs, brisket, turkeys and making his famous barbeque sauce. As with everything else in his life he strived to be the best at cooking and won many 1st place awards and was even highlighted in the Safford newspaper. We fondly call him the “Pit Master” as his creative nature caused him to create, with his own hands, an impressive grill named “Alice” named after his late Aunt Alice Moore. He also renovated an old Holsum bread truck and painted it fire engine red and put his special flame design on it. In his later years, pulling from the skills of his father, he mastered being able to fix cars and utilized this craft by working for Kempton.

Private family funeral services for Junior will be conducted Saturday, February 5, 2022, at the Vining Funeral Home. Concluding services will follow in the Safford Cemetery.

To plant memorial trees or send flowers to the family in memory of Junior Harrell, please visit our flower store.

Your condolence is awaiting moderation. Once approved it'll appear in the guestbook.

From your Texas family:
We are saddened by your loss. We're praying for God to strengthen you with great memories of good times! Please accept our sincere condolences! Remember prayer is the answer. May God comfort you now and forever!!

My condolences to Mrs.Harrell,Rosanna,Deborah and his daughters Keisha and Kayla and all his family. Your son,brother a d father was a friend of my brothers and I in Maricopa. I remember us all riding the school bus and having lots of laughs and good times. I still live in Maricopa and so does my mother and my brother Randy. Rest In Peace Ben and many blessings to you and all your family. Your Friend Tammy (Cowger)Escamilla

Harrell Family, we send our deep love and condolences. Rosanna is so special to us and we mourn with her.

A candle was lit in memory of Junior Harrell

Well done cousin. May you rest in peace.

We cant believe you are gone . We love you Ben

Condolences to the Family. Continuing praying for the family.

Psalm 34:18 "The Lord is near to the brokenhearted and saves the crushed in spirit." Psalm 73:26 "My flesh and my heart faileth: but God is the strength of my heart, and my portion forever." Matthew 5:4 "Blessed are they that mourn: for they shall be comforted."
Remember the Times:
Moma well done raising your first born.
Sisters Hallelujah Hallelujah for a big brother.

We the Abundance of Rain Christian Church along with Bishop and Pastor Henry send our deepest condolences to the family of Brother Harrell. We are grateful that you share your family with us. We pray that God will continue to comfort and keep your family. Jesus is the resurrection and the life, he that believes in Him , though he were dead yet shall he live. Be comforted in Jesus family.